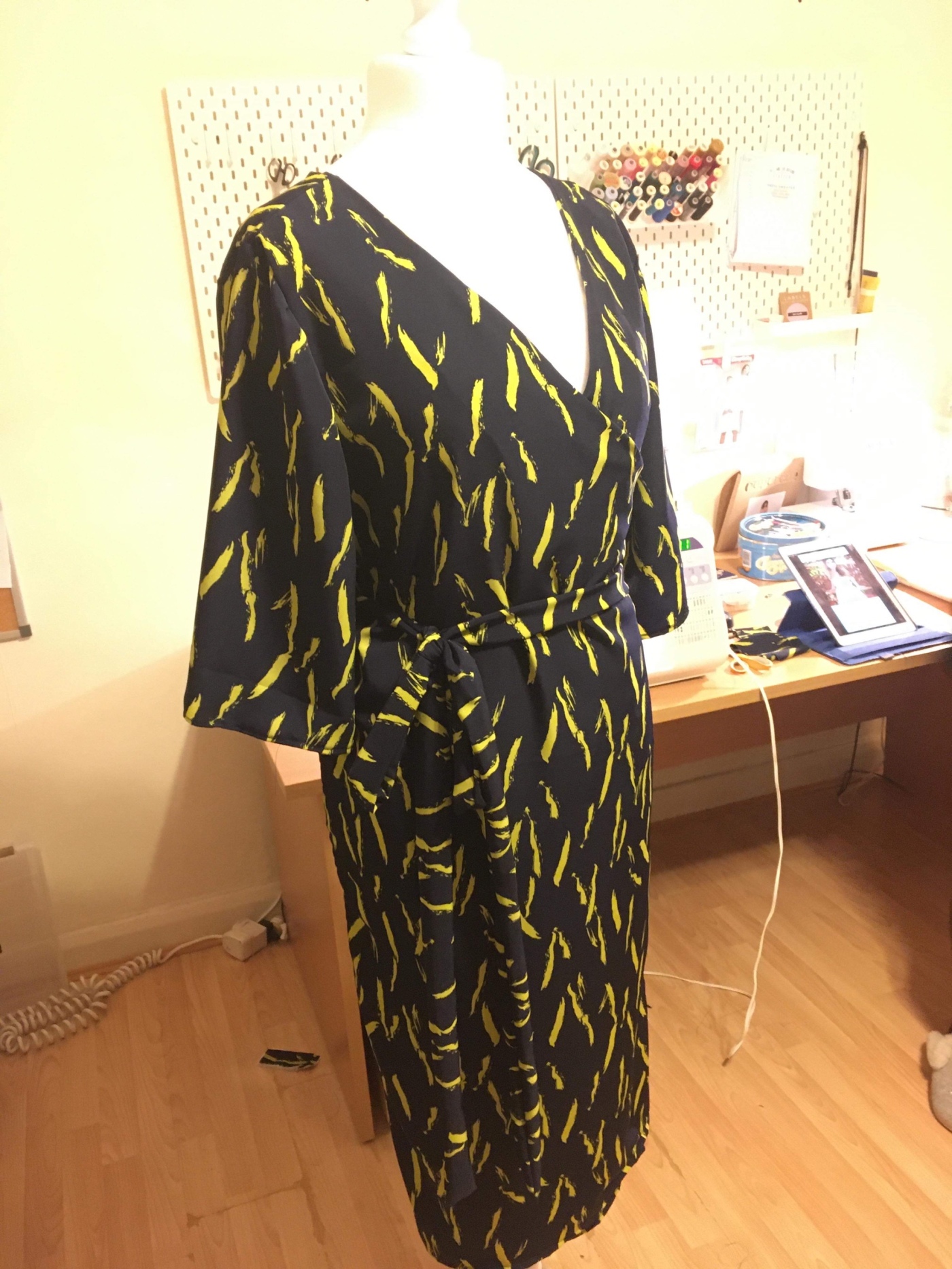 Yesterday, my friend Carol and I made this dress for her. She, like me used to sew and is now returning to the fold after a long break.

At the start of the day, we didn’t know we would finish it in just a day, albeit a very long one! Carol picked this pattern for a dress to wear to a winter wedding. The fabric she chose was a striking navy blue viscose with swipes of acid green. It has lovely drape, ideal for a wrap dress like the Sequence Dress.

As neither of us had used this pattern house before, and the make was pitched at a skilled level, we decided to make a toile first as the pattern measurements didn’t line up exactly with Carol’s. We used some polyester cotton for this and just cut out the front, back and sleeves. It fitted ok, so we moved on to cut out the lovely fabric.

The pattern instructions weren’t the best I’ve used and were a little confusing in places. We also looked up made up examples on Instagram to give us idea of what it looked like on someone of a normal size, rather than a miniscule size 8 as shown on the pattern. The example looked good and gave us the confidence to continue. We lengthened the front and back by about 4 inches so that it finishes just under her knee.

The pattern instructions were on the same sheet as the pattern pieces, with instructions to make it into a booklet, which seemed a bit of a faff so we didn’t do!

The pattern can be used for a dress or a top, with thick ties or thin ties. We didn’t quite get that it was an either or, thick or thin. The pattern review on the Foldline suggested using the thin ties for the dress, so that is what we did.

We used interfacing for the front facing as suggested in the instructions, but we both agreed that we wouldn’t do this if we made it again with the same fabric, as it was difficult to iron on the fabric and didn’t seem necessary, but I suppose it depends on the fabric you use.

We worked through the instructions and put the front and backs together, followed by the front and backfacing ( a bit fiddly) and then seamed the sides and then set the lovely shaped sleeves. We used the sewing machine for the construction and decided against using the overlocker as it was threaded up with white. We used a zig zag stitch to neaten up the seams.

Finally we hemmed the sleeves, the fronts and the hem.

Carol tried it on and we tied the ties around the front, crossed round the back. Something wasn’t quite right.! We looked again at the made up version and realised we shouldn’t be crossing the ties and tied them at the the side. Voila- it looks great!