There are some foods we have been eating whilst here which are superior and/or cheaper than the UK. I am going to take a few items back which will travel ok. There are some more I would take but they proabably won’t travel very well, such as cheese, avocados, oranges, lemons.

We love the supermarkets here, as I have said before. We have been using mainly Carrefour as it’s closest but also Lidl and Mercadona. Some things are cheaper and some things are the same or a bit more expensive. However, the variety and choice of goods is far better here, in my opinion.

The olive oil here is almost green – which tells you that it is good! I will be taking lots of this home.

You can buy this in jars or tins, in oil or brine. We have been using the tuna in a jar with olive oil. The pieces of fish are lovely and chunky, not like the mashed up efforts sold in tins at home. This is actually bonito which is also very nice and is a bit cheaper than the tuna. I will probably take home both.

I am disappointed that whole almonds here are more expensive than in the UK. I thought that as they are grown here they would be cheaper but apparently not. It seems that Spain still import almonds from California! However, the roasted and salted ones from Lidl Spain are delicious and not available from Lidl UK. 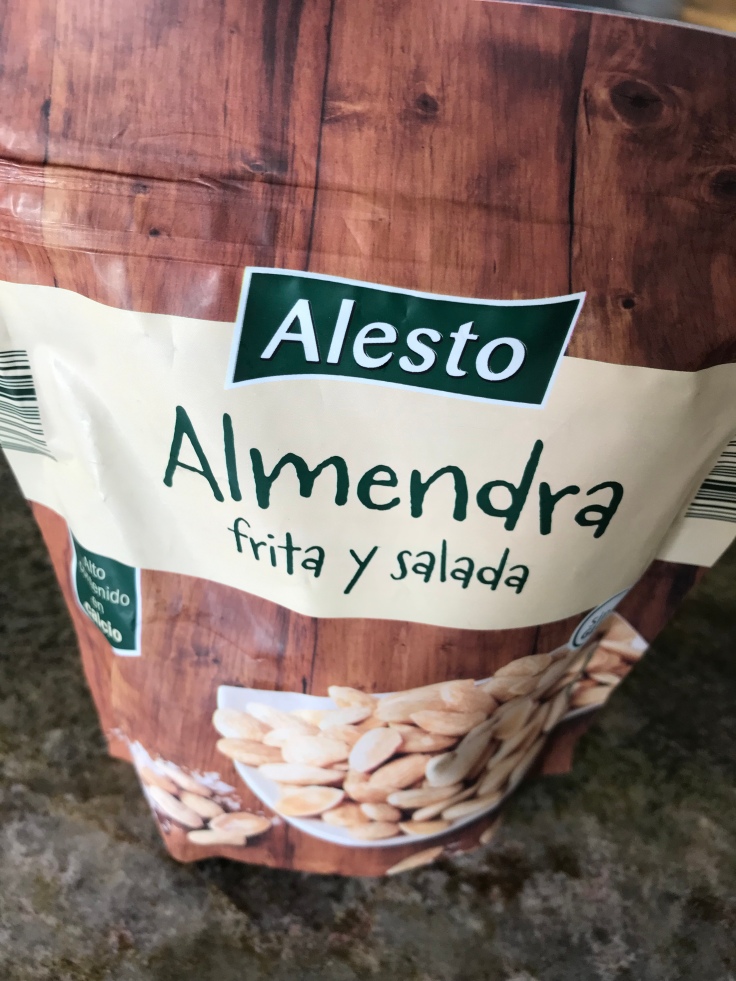 Ready cooked chick peas are sold in jars here rather than tins.  The actual chick peas themselves are much plumper and tastier than the tinned variety available in the UK. You can sometimes but these in Lidl UK but usuallly only when there is a Spanish week. 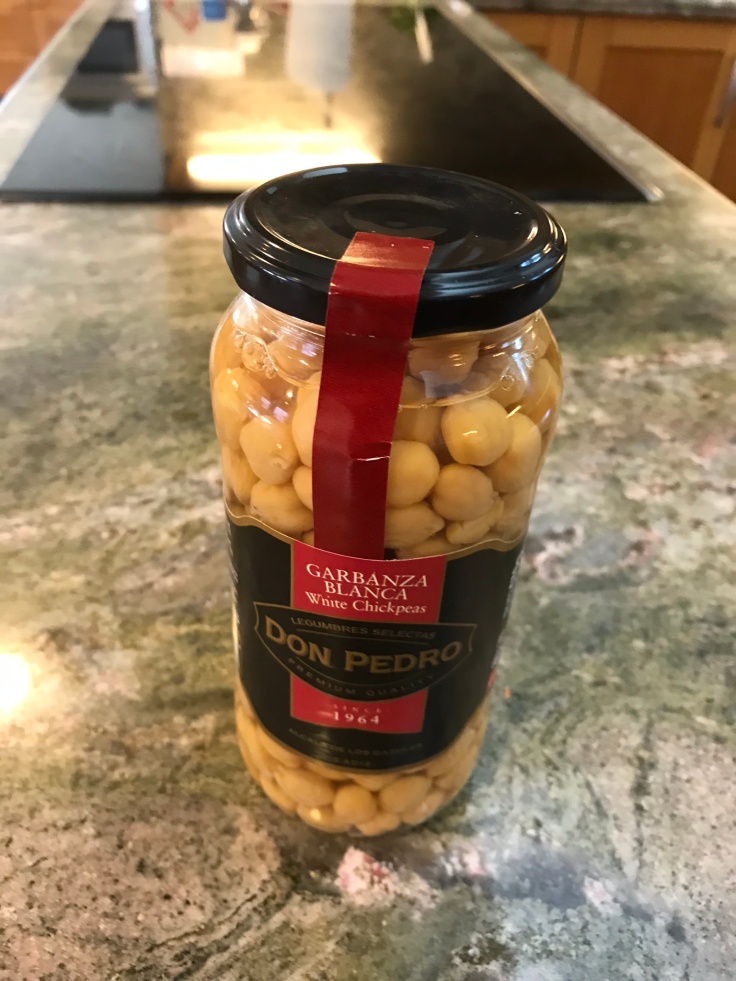 There is a HUGE choice in olives as you would imagine. Some of them are quite bitter but we have found some nice ones which come in very small tins, (which is good as they tend to go off if you open a large jar or tin) so I will be bringing back a few cans of these. 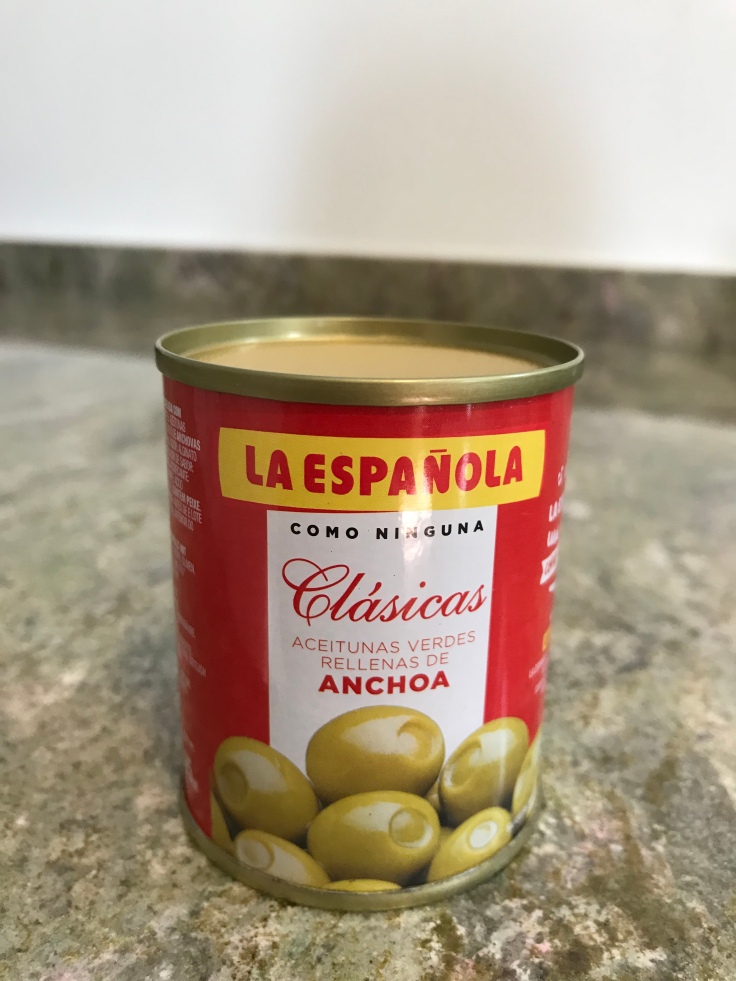 This is a bit like passata but nicer. It comes in cartons and is good for sauces. Lidl do a good version. 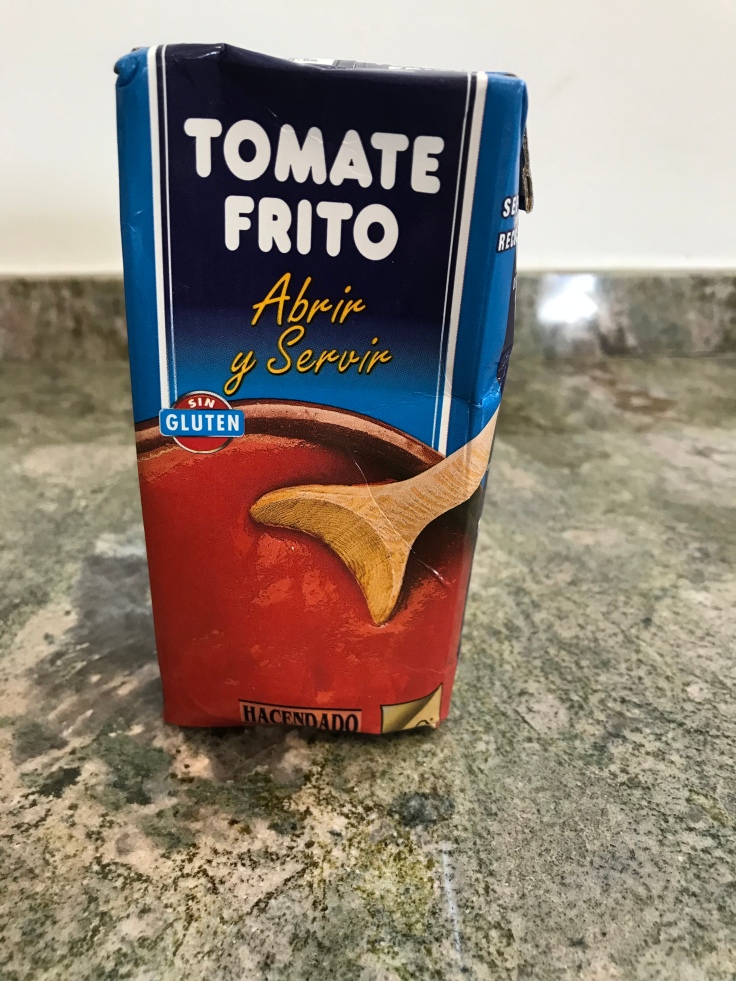 I do buy these in Lidl at home but I will be bringing some of these back. They are good for me as they are GF. 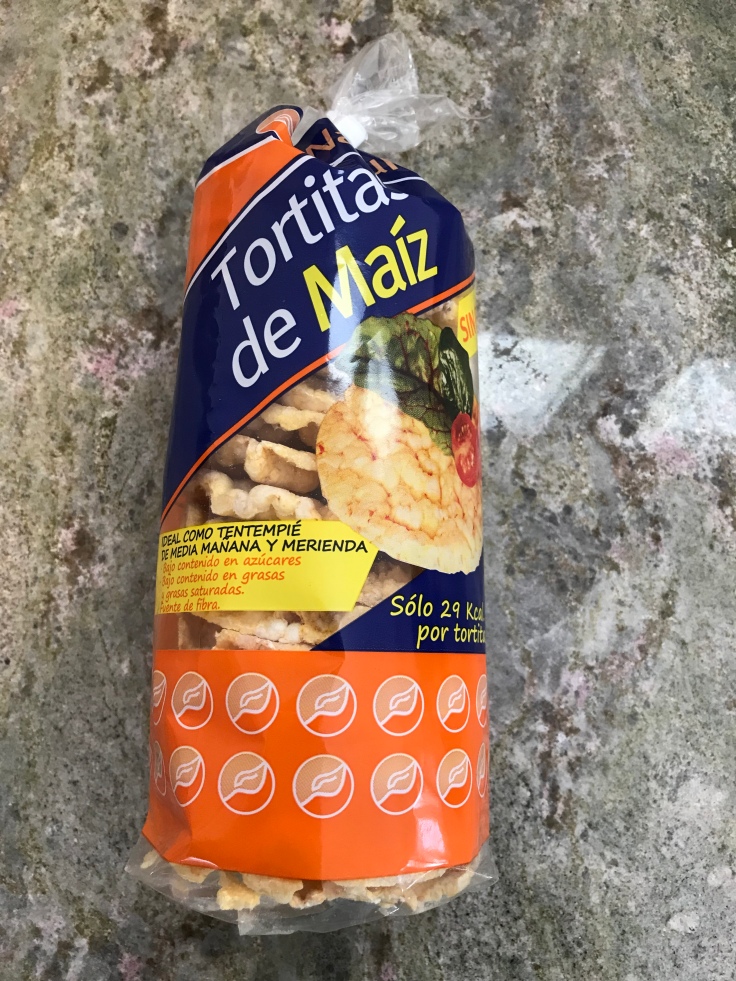 The black raisins are lovely and juicy and great for adding to the granola after cooking.

i use a lot of wine vinegars in salad dressings but I also like to have other vinegars in my store cupboard for when I need them. I have bought red and white vinegars here,  which are cheap at approx 50p for a litre,so I will be taking some of those home. Sherry vinegar is ridiculously cheap too. I don’t use this a great deal but it’ll be there if I need it and it keeps for ages.

2 thoughts on “Food we will be taking home from Spain – as it’s better or cheaper!”

This site uses Akismet to reduce spam. Learn how your comment data is processed.

Whilst we are in Spain, I’m going to do Tapas Tuesday. We chose 2 each out my new book. Today we had Prawns and Romesco Sauce, Stuffed Padron Peppers (my fave) Potato cakes and Chorizo Salsa #tapastuesday #retiredlife #spanishfood #estepona #littlebookoftapas
I am featured on the Minerva blog today with this Vogue Top I made a while ago. It’s a wonder I am smiling as my feet are killing me in the heels I am wearing for the photo😂 #sewover50 #minervadotcom #sewinginspain #sewingprojects #sewover50andfabulous #sewingblogger #sewingbloggers #sewover50tops #sewistsofinstagram #theseshoesarekillingme #minervamakes #minervamakers #imakemyownclothes #voguepatterns #sewover60
It’s good to be back in Spain in the sun. The sewing machine and loads of fabric made it too, so I’m going to be busy but happy! These two are courtesy of #minervadotcom #minervamakes #sewistsofinstagram #sewists #sewover50 #sewinginspain #kitchen #apron #retired #myhappyplace #wintersun #anothersummer #frenchpoetry #sewingprojects #sewing in the sun #sewover50sewingplans #sewover50wip
Memories of the summer. Look at my gorgeous white agapanthus 😀and my oversized stripey top. It’s on the Minerva blog today 😍 ##minervamakers #tillyandthebuttons #sewover50 #sewover60 #imakemyownclothes #bigstripes #janomemakes #minervamakes #sewistsofinstagram #sewingblogger #sewcialists #memadewardrobe #memade #sew50visible #sewingismytherapy #sewingaddict #sewingnora #minervadotcom #minervamakes
Chicken Satay, Peanut Sauce and Pad Thai - looks and tastes great but you should see the state of my kitchen 😂 #curry Friday #thaifood #noodles #
This week it’s a new one for us. Jamie Oliver’s Stuffed Curried Aubergines. Made a few changes - full fat coconut milk and ordinary tomatoes instead of cherry tomatoes. Also used dried curry leaves as I can’t find any fresh ones at the moment 😫 Maybe I could grow some? #jamieolivermeatfreemeals #vegan #vegetarianrecipes #curryfriday #aubergines